Fun Comes First: An Interview with Paul Reiche III in 1992

A good game has to have a fun core, which is a one‐sentence description of why it's fun.
‐ Paul Reiche III

It sounded so simple.  After spending a while searching for it, I finally discovered where this quote originated:  A computer magazine called COMPUTE!, January 1992, Issue 137.  The article is “Principles of Good Game Design” by Heidi E. Aycock.  In addition to Paul, Dave Jones (Lemmings), Roberta Williams (King’s Quest), Richard Garriott (Ultima) and Dan Bunten (M.U.L.E.) were also interviewed.

Besides looking to the real world for standards of fun, Reiche examines successful games of the past. His latest release, Star Control, was inspired by an old 8-bit Atari game called Star Raiders. Look at the graphics of Star Raiders and you'll smugly roll your eyes. But the game was great fun back then, and it's still fun today. "I think those games are overlooked as a source for fundamental game design," says Reiche.

While I was looking on Twitter, Arianna discovered this blog and decided to add a tweet with a link to Star Controller: 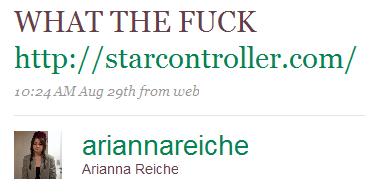 I take it as a compliment.  It’s funny too.  I’m just glad that she found the blog and posted a link to it.  Many people question why Twitter is relevant with its 140-character limit micro-blog format.  One interesting feature of Twitter is its ability to track phrases that are mentioned very frequently in messages and display them as “trends”.  Someday, when Toys for Bob gets that chance to make a new Star Control game, I’d love to make an attempt that turning “Star Control” into one of these trends.  I have made a Twitter page for Star Controller and at the moment and it is barely updated.  If any Star Control fans have any thoughts about Twitter, I’d love to hear it.

In conclusion, check out the article.  It’s just over 17 years old and I think this is the oldest interview I’ve seen that is related to Star Control or Paul Reiche.