I’ve been watching Twitter for anyone tweeting about Star Control and I’m starting to notice that people are starting to see a resemblance between the 2012 Olympic mascots and a beloved race from Star Control II: 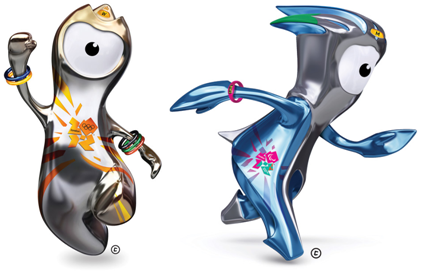 Do you see it?  They resemble the Spathi.  Although one could argue that any alien with a giant eye can look like the Spathi.  In fact, the player doesn’t see much of them in the game, other than an eye and purple arms:

From what I’ve read about previous mascots, these mascots seem to be designed with a family friendly image and usually ignored and criticized for their quirky appearance.  Their names are based on the town and village Much Wenlock and Stoke Mandeville.  Each character has their own Facebook and Twitter page.  There is even a background story claiming that they have been formed from the last 2 drops of steel used for building the Olympic stadium in London.  It even goes as far to say that their shiny metal surfaces is a metaphor that they reflect the people.

To be honest, I don’t pay much attention to the Olympics.  I think it’s a very epic international event and it’s amazing to see how far fans will go to support their favorite countries.

It’s interesting that there are people who notice the similarity and are willing to tweet about it.  I’m not exactly sure if this can be used to promote a new Star Control game.  It does show that the Spathi are highly memorable, just like the Prinny (Diagaea), Chocobo (Final Fantasy) and even the Companion Cube (Portal).  I’m still dreaming of the mass-production of a Spathi plushy.

I remember a long time ago, there was an announcement that Pluto is no longer considered a planet.   A thread on the UQM forums called “Pluto is no longer a planet.  Poor Fwiffo” was made.  Fwiffo represented the humorous side of Star Control and was more complicated than just plain “comic relief”.  I remember when I first encountered Fwiffo, I felt a bit of tension while convincing him to join my side.  He didn’t simply switch sides; I had to convince him that he was alone and that I was powerful; I felt unsure that I would be successful and felt a sense of joy when I finally succeeded.  He even gave a clue about the location of the Syreen that some people may have missed.

In conclusion, I do see a similarity between the Spathi and 2012 Olympic mascots.  Maybe this is a sign that we’ll start seeing more things that remind us of Star Control.  If it is, I wonder what could happen next.