It’s no secret that Archon has been ported to multiple consoles.  One of the ports I wanted to write about was the NES version.  It is straightforward port containing a 1 or 2 player mode like the other ones.  This version also has a demo mode where the player can watch the computer control both sides.  It’s a good a way of seeing what kind of strategies it can use.  From what I’ve seen, this version isn’t the most popular version of Archon.

Although this is a straightforward, I found some information about the developers that may interest some people:  This port of Archon was developed by Bullet-Proof Software and published by Activision.  Free Fall Associates (now Free Fall Games) still owned the rights to Archon and otherwise had nothing to do with creating the game itself.  Bullet-Proof Software’s most popular games are without a doubt, Tetris for the Game Boy and NES.  In addition, they are one of the most popular games on both consoles.    The original creator of Tetris, Alexey Pajitnov still owns the rights to Tetris and can be licensed through a holding company.  It makes me wonder about the connection between Free Fall, Activision and Bullet-Proof Software, and TFB eventually making games for Activision. 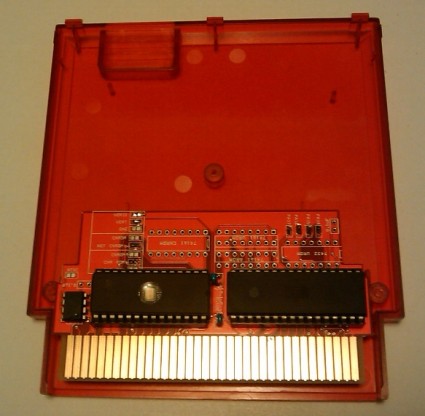 One of my first attempts to set up a repro cart.

Recently, I wanted to take a shot at reproducing a working NES cartridge using only new parts.  I know that it’s possible to take an existing cartridge and replace the ROM chips.  I didn’t want to wreck any existing games, so I ordered a repro board, case and lockout chip and a bunch of ROM chips I could write to.  Ultimately, I spent more than I thought I would and I failed at my first few attempts.  In summary, I eventually created a reproduction of Devil World, a game that has never been released in North America due to Nintendo’s strict policy towards religious references at the time.  I also chose it because it also didn’t need any additional chips to solder.  I wanted to recreate an Archon cartridge, but as of this writing, waiting for parts to arrive in the mail, burning ROMs and checking if it works properly made this little project go longer than it really should.  I definitely learned a lot about how various cartridge configurations and showed me how relevant homebrew groups and retro gamers really are.  I believe this is the first time I learned about retro video games through hardware.