I was reading some articles about unreleased video games, when I came across an unreleased NES that grabbed my attention: 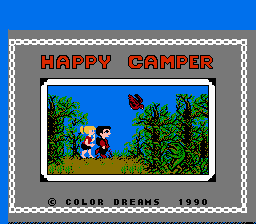 Although the game itself has no connections to Star Control whatsoever, I just think it’s funny that I forgot how weird and obscure video games can become, no matter what year it is.  Also, most people would look at this game and say “Is that real?”, while Star Control fans would immediately think of the shady and lovable Orz and their crazy language.

"It actually started out life sort of poking fun at the environmentalist/camping scene and at the same time trying to blend the Paperboy/California Games/generic skateboard game with an outdoor theme."
- Jon Valesh 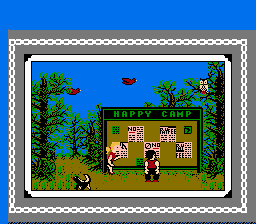 There’s no hidden messages or anything else that could be connected to Star Control other than  the game’s name.  Also, they missing the asterisks in happy camper.

Speaking of the Orz language, there has never been any official translations from Paul or Fred; only educated guesses from the fans (e.g. us):

"The best *campers* are the *happy campers* — i.e. *campers* that have friendly relations with the Orz (such as the Humans after allying with them, or the Taalo, which are "even better *campers* than [the Humans]")."</br> - Ultronomicon, Orz communications

I heard there was a sequel planned for Happy Camper, called Silly Cow… Just kidding!  Anyways, I hope you enjoyed the funny screenshots.  I just wish that the Orz could tell me what happened to the Androsynth, instead of telling not to ask and then trying to kill me.

"They were snagged by the entity who/which projected its fingers into our dimension (which looked to us as the Orz.)"
- Paul Reiche and Fred Ford

The mysteries behind the Orz and the Andrysynth can only be answered by a true sequel to Star Control II made by the gods at Toys for Bob.

If anyone is curious about this game, there’s more info at Lost Levels.