Have a *Happy* Star Control Halloween!

At the beginning of October, I really wanted to carve pumpkins with Star Control related images such as the Star Control II logo, and even some of the ships, then sharing them on the blog for everyone to look at.  Unfortunately, I was so busy with other personal stuff that I never had the time to even start.  To make matters worse, I didn’t even know how to carve specific shapes and details on a pumpkin, so the first thing I did was search YouTube for pumpkin carving videos.  They mentioned that it would take several hours washing the pumping, hollowing it out, cutting the lid and cutting the shapes and details.  Also, the fact that I am an amateur pumpkin carver would make it take even longer.  So, I gave up on the pumpkin project altogether.

I tried my best to find something that resembles the theme of a Star Control Halloween and I’d like to start off with a quote from the Pages of Now & Forever:

"You know you played to LITTLE Star Control if you decide to throw a halloween party on Spathiwa"
- Pages of Now & Forever, Star Control Humor

Recently, I was reading a series of webcomics called “Cyanide and Happiness”, known for its sick and twisted humor not for the light-hearted or anyone who is easily offended.  There was a particular comic that grabbed my attention: 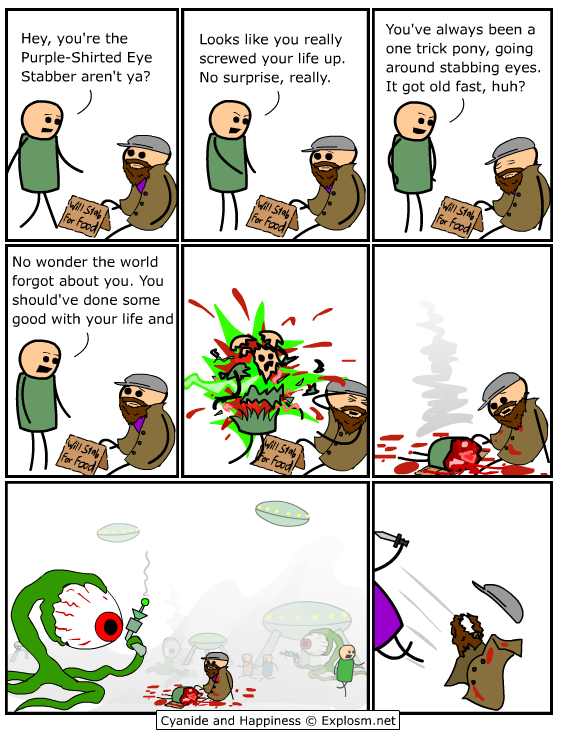 It looks like the Spathi, doesn’t it?  There are some key differences such as the aliens in this cartoon have no torsos or claws, there are no Eluder ships and they are not acting very cowardly at all.  If Fwiffo pulled a ray gun and start to blast people to pieces, I’d be scared too.  Some people say that it’s the ones we least expect who will go insane and start blasting away at people.

Anyways, I hope you enjoyed the obscure Spathi resemblance.  Have a safe and happy Star Control Halloween!