Did You Know? VUX Limpet Cocoons

I was looking through a bunch of Erol Otus drawings that I scanned from the manual of Star Control for the Sega Genesis. One of them caught my attention: 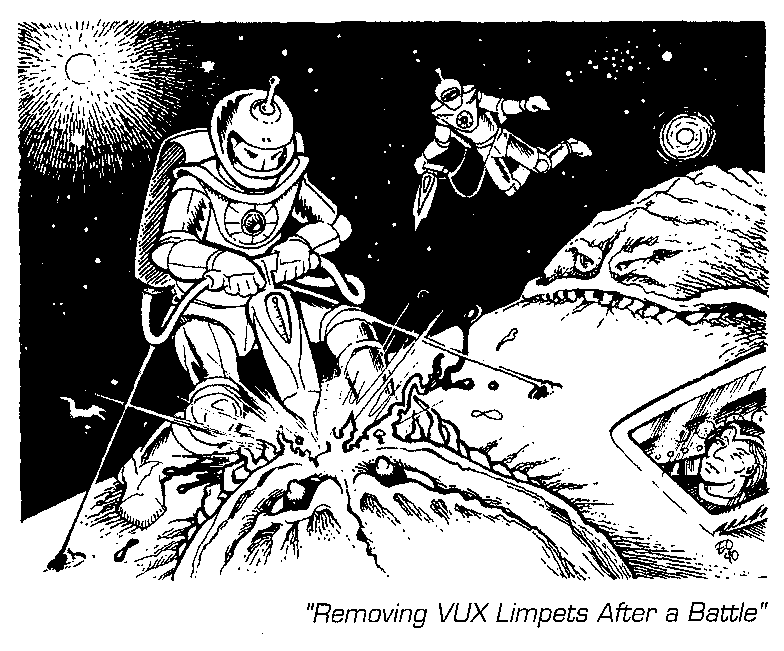 The reason why this caught my attention is because this is the first time I’ve ever seen a limpet close-up.  In Star Control and Star Control II, the limpet cocoons have always been displayed as green balls.  It’s even shown the the detailed ship info in the first Star Control in the top-right corner:

After further reading, I found some interesting info in the UQM Wiki:

"An additional Intruder offensive weapon is the 'limpet', which launches inside a protective cocoon which automatically targets enemy vessels. Upon nearing a target, the cocoon cracks, releasing the limpet to clamp down upon the enemy vessel's hull."
- "Intruder", Ultronomicon (UQM Wiki)

That actually clears things up; the green balls that we’ve been seeing in the game have been the cocoons, and the picture of the limpets being removed are the limpets themselves after they have been hatched.  With the bitmap sizes, it would be impossible to display a cocoon actually hatching, and it would be difficult to tell the difference.  Most of us have only seen the limpet cocoon stick to the enemy ship, making a chomping sound, and people like myself haven’t thought much of it since I’m usually concentrating on the battle itself.

So, there you have it.  That’s what a limpet looks like after it hatches from its cocoon.  And now you know…