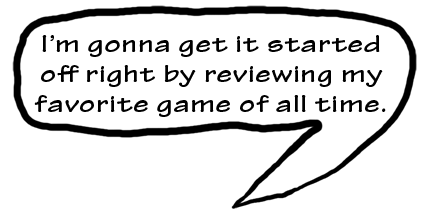 Long Tail Gamer is a new blog about video games. What sets it apart from other video game blogs is that it is dedicated to the games that have stood the test of time, still available to play, cheap and has a strong community. For his first episode of Long Tail Gamer, Cameron Goble started with his favorite game of all time, Star Control II!

He shows off his spectacular starmap which comes with the game; I wish I had one. In addition, Cameron mentions the ability to search the starmap by typing the name of the constellation. This feature made it’s first appearance in UQM 0.5.0.  I only discovered it after I finished the game:

The Starmap is searchable! Type / then the beginning of the constellation name, and you can tab through all possible completions.

When Cameron mentions Fred Ford and Paul Reiche, he mispronounces Paul Reiche’s name. It’s a tricky last name because it is not pronounced the way it looks. Reiche is actually pronounced the same as “Richy”. I made the same mistake when I saw Paul’s last name. I remember typing his name into a text-to-speech program, which pronounced it as “Ray-Chee”. I didn’t get the correct pronunciation until I listened to a video interview with Paul.  It’s probably not the first time anyone has mispronounced the name:

"I recently got into an argument about this very thing. We've always pronounced it RITCHIE, but I've lived in the UK for the last five or so years, where people are more apt at european pronunciations. So when I tell people that I do not in fact pronounce it the German (technically correct) like RAI‐CH‐JH‐IA, they frown upon me.

While describing the different races, he recites a funny poem:

There's the spunky Pkunk, new age avian kooks.
They're friends with the humans, who have all the nukes.
There's the bold, bash Thraddash, who have many cultures.
Then the devilish Druuge, those cruel corporate vultures.
There's the slinky Syreen, who all look like whores
and the enigmatic extra‐dimensional Orz.
There's so many more. I could go on and and on.
And at the heart of it all, we'll face the Ur‐Quan.

After reciting his poem, I thought he said “I’m sorry about that. I am not generally moved to poetry but I love Ur-Quan Masters and [zi ha tu no si retz en rous]”.  I thought he started speaking in another language.  It turns out he actually said “The heart, you know, she writes her own rules” in a strong French accent.  Either that, or he understands the Orz language and I should have used asterisks.  I feel a little embarrassed and I’m just glad I that it’s been cleared up.  Thank you Cameron for clearing that up for me; I haven’t heard anyone use a French accent in a long time.  It’s still poetic nonetheless.  We can all relate to his poetry; Star Control has touched our hearts at one point or another.

He covered a lot of stuff about Star Control within 8 minutes and 17 seconds, and it’s definitely worth watching.  Thanks Lukipela for posting a link to his blog and to Cameron for making a video about Star Control.  It shows that for a game from 1992, the fan base is still strong and there’s people out there willing to write about it.

In his blog, he linked to a thread I started a long time ago called “Star Control Photoshops”.  I’m not an expert at photo manipulation and I somehow became inspired to take random images and make some changes to add a Star Control theme to it.  I was surprised by the responses I got at the time.  I wanted to do it after seeing the “Photoshop Phridays” on SomethingAwful.