I was reading some of the forum threads on the UQM Forums when I came across a thread called “zarla sheenaza - a tribute to StarCon Goddess”.  Zarla is known for her artwork on DeviantArt.  Some of her images can be seen during the installation process of The Ur-Quan Masters.  In addition to Star Control, she has also drawn images from Metroid, Metal Gear Solid, Phoenix Wright, Pikmin, Pokémon and EarthBound.  She has a fascination with Admiral ZEX and his love for humans.

At the end of the video, it shows a list of characters that appeared.  Here are the appearances from Star Control: 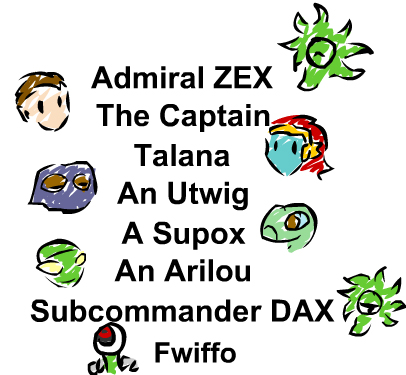 Links
UQM: zarla sheenaza - a tribute to Star Con goddess
Newgrounds: Stamp on the ground
Zarla’s Star Control Webpage
Zarla’s LiveJournal: We’re sending out an invitation, to everyone in every nation