“fingers can be interpreted as a way to describe an individual Orz, according to UQM Wiki”

I received an e-mail from Joe who sent me an Orz T-shirt he created.  It’s got a nice outline of an Orz with the cryptic phrase “fingers”.

The Orz really stand out in Star Control II as that race that is difficult to understand and is a valuable ally.  Unfortunately, they’re the only ones who know what happened to the Androsynth and pressing them on this topic makes them “frumple” and will turn against the player. Their music is very soothing and is mixed in with strange sounds. 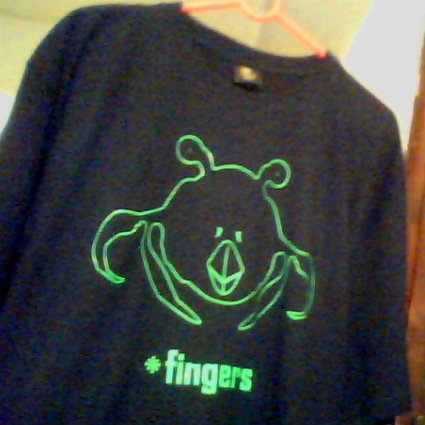 It’s definitely an awesome shirt. Obviously, most people wouldn’t understand fingers or what the Orz is, which adds to the mystery of the Orz itself.

I remember seeing a forum thread a long time ago on the forums where someone made a T-shirt with all of the Star Control ships arranged in a circle with their ship name underneath each one. Fan creations are always cool stuff to check out. There are different ways to create custom shirts from images. The ways I have seen are iron-on printing paper, using a screen-printing machine or paying a company to do it for you.

It’s awesome to see that Joe became inspired by Star Control and the fanbase and created a shirt design to show his love for the series.

I’d love to create a bunch of custom shirts for myself. I just need to find that right balance of style, price, resources and time. I remember looking at an online website that specializes in this and each shirt wound up costing between $20-35; of course, each image was full color and large.

This is a nice image and a great shirt, Joe. Thanks for sharing it with the world.