I know it’s been long since I’ve written anything; months.

I’ve been so busy with personal stuff. Right now, I’m just astonished by how much the internet has evolved over the years and the impact of social media. There are people out there with bigger blogs without paid hosting or personalized e-mail addresses. So much content posted on Tumblr, Twitter, Pinterest and Facebook. Everyone’s re-tweeting, re-blogging, #hashtagging and sharing. Don’t get me wrong; I’m glad people are using these products. I do comment on other posts and articles and I always try to briefly summarize it and give my opinion on it.

I never went into this wanting to be an internet celebrity. I just wanted to by a guy with a .com blog with complete control and interesting things to write about. It was a conscious decision to use my real name; I’m not an alter ego or a comedian. I’ve had some interesting contacts by doing this; one person was under the false assumption that I created Star Control and asked for a copy of the game; I wrote a lengthy response explaining that is NOT the case.

I want to do a playthrough of a video game with commentary. With my tight schedule, I’d like to play something that can be played in a single sitting. There are so many games released that are not getting as much recognition as they should. The sci-fi and fantasy genre is growing and the the indie community is rising.

The public library I’m at is blocking access to starcontrol.com. WTF? 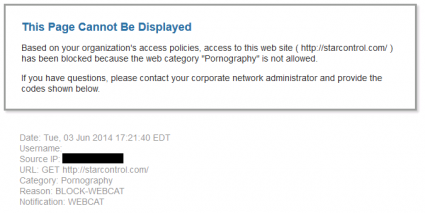