An Old Letter From George Broussard 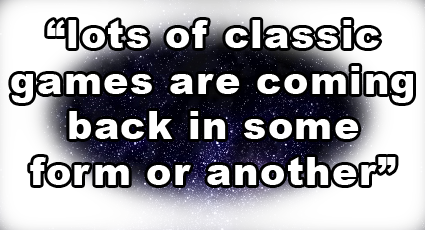 I was looking through my past e-mails and I remembered that I e-mailed George Broussard, the co-owner of 3D Realms.  This was after the time that Duke Nukem 3D was released for Xbox Live Arcade and the voice clip of Duke Nukem promoting Star Control.  I wrote an e-mail thanking him for putting Duke Nukem 3D on Xbox Live and asked how he felt about Toys for Bob’s desire to make a new Star Control game with Activision.  I also attached the MP3 file to the e-mail for him to listen to.  Here’s what he said about Star Control:

"Heard about it, but never played it. I'm not a big space sim/flight type of guy. I pretty much stick to action shooters and rpg's like Oblivion.

The voice clip was amusing. I don't have any thoughts on bringing back Star Control, having never played it, but lots of classic games are coming back in some form or another, so it's not an alien concept. It normally just depends on fanbase and popularity, and mainly, who owns it."
‐ George Broussard

Even though he has not played Star Control, I’m glad that he liked the voice clip and said that classic game revival is starting to become a trend.  His last sentence about fanbase, popularity and who owns it is directly related to what it will take to make a new Star Control game possible.  I know that the Star Control fanbase can be described as a strong “cult following”, Toys for Bob owns the game’s content while Atari owns the name “Star Control”.  His reply actually proves that to make Toys for Bob’s dream of a new Star Control possible, we have to make the fanbase larger and stronger, raise Star Control’s popularity and get those legal rights from Atari.  Of course, this is easier said than done.

We all know that TFB is currently working on a game that is not Star Control.  Paul Reiche and Fred Ford have been making video games for over 20 years; they have worked on other games before forming Toys for Bob in 1989.   Their website states “what’s really important is that we keep working on fun games for fun people”.  I also remember Fred Ford posting on the UQM forums about “keeping food on the table”.  Sometimes, I feel like they are being pushed into becoming “that licensed-game developer”.   I know that they are capable of more than just skating games and minigame collections and I will bet my life on that anytime.  There’s so many possibilities and I feel that pumping instant sequels and generic movie games hurt the video game industry for a quick buck; I wish success was about quality, not quantity of sales.  There are so many different sides to this and I admit that I do not know everything about this situation.

If Stardock does get the rights to Star Control, I hope they get Toys for Bob involved in it somehow.  Brad Wardell seems like a great person who understands that Star Control II deserves a worthy sequel.

There’s so many discussions about sales, marketing, demographics and getting reviewers to give high scores for their games and games with great potential get put into risk over a money/management issue.  Games such as Prototype, Brütal Legend, Ghostbusters and Chronicles of Riddick: Assault of Dark Athena were in risk cancellation during development.  This is due to the merger between Vivendi and Blizzard, forming Activision-Blizzard.

I heard about this merger from a friend of mine a few years ago when there was an official announcement made by both companies.  At first, I thought this was awesome because two giant companies were coming together to form an even bigger company.  “Maybe they’ll have more original games”, I thought to myself.  Now I think differently about this.

As I write about this, I know that no matter what happens, we will be waiting for TFB to finish their game and maybe we might hear something about the chances of that sequel we’ve been dreaming about since.

Thank you so much George for writing back to me.