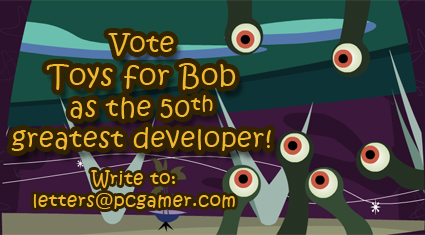 SC2 is one of the greatest games of all time. TFB deserves this!

I was reading random game news on the internet, when I realized that the April 2009 issue of PC Gamer had an article titled “49 Greatest Developers” by Richard Cobbett.  This is not a top 49 list, where a developer is higher than another; they are simply the greatest developers in no particular order.

"And in case you're wondering why we stopped just shy of that magical number of 50, that's because we wanted to leave one spot open for you to fill in.  Send us an email at letters at pcgamer dot com to let us know who you would add to that list."
- Richard Cobbett, "49 Greatest Developers", April 2009, PC Gamer

We have the chance to show PC Gamer why Toys for Bob deserves this honor.

Can we make it happen?

On the list of 49 are high-profile developers such as Blizzard, Bethesda, Rockstar North, Epic Games, Microsoft, Valve, BioWare and id Software; there are other developers I never guessed such as Dani Bunten-Berry, Popcap, The Nethack Team, Telltale Games, Introversion, Graham Nelson & Emily Short, Tim Schafer and Origin.  This list is not solely based on who has the most sales, biggest guns or even the largest influence on game reviewers; these are people who all have their own fanbase, like Toys for Bob.

We can convince PC Gamer to choose Toys for Bob because TFB has been making games since the beginning of the video game industry.  The two gods we like to call Paul Reiche III and Fred Ford have been making games before they even formed TFB.  Before forming TFB, Paul has worked on other games such as Archon and Starflight; these are also games that have a strong legacy of their own.  Paul was credited in ToeJam & Earl as “Invaluable Help”.  ToeJam & Earl creator, Greg Johnson and Paul are good friends and that’s a really cool connection.

After all of these years, Star Control still has a strong legacy.  Star Control II really raised the bar for what it is capable of evolving into and turned into an entire universe.  It was more than a Melee and Full Game mode.  There was an entire storyline where the player can move around freely in a pre-determined plot to find out what has happened during the war with the Ur-Quan and ultimately strike back and win the war.  Out of the kindness of their hearts, Toys for Bob released the 3DO source code to the community.  It eventually evolved into the open source masterpiece we all know as The Ur-Quan Masters.

It’s not about the quantity of e-mails that PC Gamer receives; it’s about the quality of the letters they receive.  I know there are people out there who will write to them only to say “I love Infinity Ward” and simply say their choice without taking the time to say what’s great about that developer.  If they add small developers to the list of “greatest developers” then there’s nothing to stop Toys for Bob from making this list.  No matter how advanced gaming becomes, it still needs polish, detail, easy controls and enough time to get everything done right.

It’s hopeless if we do nothing; it’s possible if we try.

What can I tell them?

There are many things that can be said.  There is no perfect way to write to them.  The most important thing is being clear, concise and straight to the point.  The people who read these e-mails will be reading thousands of e-mails on a single day, so have fun with the letter and be creative. Put “Toys for Bob” in your subject line, so when they see the subject of your e-mail, they will know who you chose before reading the rest of your e-mail.  Tell them about Star Control:  The deep storyline, complex combat strategy, the open source UQM, great dialog, colorful imagery, etc.  Tell them about Toys for Bob’s desire to make a new Star Control with Activision and how they’ve collected thousands of fan e-mails supporting them.  Most importantly, what do you like about Star Control and Toys for Bob?

I am serious about this!  We have a lot to say and if we can work together and write something that shows our loyalty to TFB and how much we respect them, it will grab their attention.  We even go as far as referring to Paul and Fred as gods for crying out loud!  It doesn’t have to be an essay.  It can even be 250 words (half a page) or less.  I’m going to write to them the moment I finish writing this post.

Spread the word!  We need as much support for this as possible. Send your e-mail to letters at pcgamer dot com.

Thank you so much for taking the time to read this. :)