Star Control 1 on Other Consoles

On August 10 2008, I wrote about Star Control on the Sega Genesis.  It basically mentioned how the PC version is superior because of its smoother framerate, better sound quality, lawsuit between Sega and Accolade for making unlicensed cartridges and some reasons why this version of the game won’t show up on Nintendo’s Virtual Console.

Many people are not aware of the other ports of Star Control on other consoles of its era such as the Amiga, Amstrad CPC, ZX Spectrum and Commodore 64.  I wasn’t even aware of it.  I just remembered that there were other version other than the Genesis port when I was reading Wikipedia.  From the screenshots, these other ports have 5 ships on each side, instead of 7 on the PC and Genesis versions: 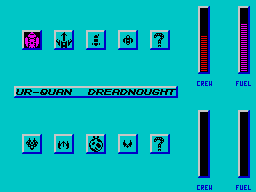 Also, there is no 3D starfield.  However, the screenshots of the Amiga version looks similar to the PC version, so it seems that the Amiga port may not be so limited.

I really want to try to play these versions.  The hard part is finding stable emulators.

Also, TFB is not involved in these other ports.  For example, Simin Pick is credited for programming the Commodore 64 version.

I admit that I haven’t done any detailed research; I just remembered the other Star Control ports and I wanted to write about it.

I recently bought a PSP from Wal-Mart.  I wanted to get it modded so that I can run homebrew software.  I had to get a pandora battery to put it into service mode to flash the firmware.  Unfortunately, I bought the PSP2001, which blocks the pandora battery and my PSP remains “hombrewless”.  So, I never had the chance to try out the PSP port of The Ur-Quan Masters.  There is DOSBox for PSP which I could potentially use to run Star Control 1 if it’s stable and easy enough to configure.