The first issue Groombridge Log is finally here!  Check it out! 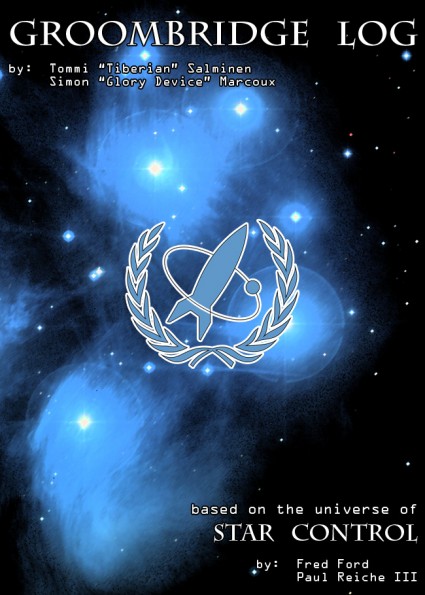 The comic begins with describing a nuclear war that takes place in the near future and and the creation and rise of the Androsynth, a slave race of human clones with genetically enhanced speed, strength and intelligence.  In the comic, a female Androsynth appears.  There was a post on the UQM forums quoting Paul Reiche regarding the Androsynth culture and genders:

Good question!  My initial intention was that, yes, they were gay, or more properly, strictly monosexual.  About the time Fred and I were working on Star Control II, I had my first friendships with openly gay folks.  It always has felt good to me to discard a prejudice and I hoped to share that opportunity in teeny‐weeny little way with the people who played my games.  BUT, when I shared this notion with our publisher, some folks took this to mean that they should use stereotypes for humor, as for instance the "fashion designers of space" crap that ended‐up in the manual.  I feel like I should have been more courageous getting that comment edited out and if it offended anyone, I feel really bad about that.

Hopefully as the future unfolds, we will find our species more accepting of others and more appreciative of individual expression... either that or we should all get jetpacks.  I'm cool either way.

Ps.  By the way, now I am not so sure that all the Androsynth are male.  I imagine they might descend from a few clonal lines, so I expect there would be both male and female and perhaps some neutrals.

Groombridge Log does a great job at pointing out how significant the Androsynth are in the timeline and shows that they have a mind of their own.  The Guardian ship is very powerful and has a unique set of strengths and weaknesses just like every other ship.  Their disappearance remains a mystery and has received various theories involving the Orz, “mysterious fingers” and even the possibility that some other Quasispace race was involved.  Their superior genetic enhancements, hatred of humans and unanswered questions make them a very interesting and different race.  The whereabouts Androsynth is probably one of the most desired questions to be answered in a sequel to Star Control II.

One great idea they used for this comic was using the starmap with arrows to show off how the different races were moving around in space; the boundary circles of Star Control II also moved around as time passed by. For example, when the player continues to check the starmap, he or she will notice certain events such as the Pkunk moving towards the Yehat and the conflict between the Ur-Quan Kzer-Za and Kohr-Ah. It gave the impression of a tactical report.

I asked Tiberian a few questions about Prologue:

It’s a great comic and I would love to see more. It stays very close to the storyline and makes me want to play through Star Control 1.  The characters are very easy to recognize and the drawings and coloring is excellent. I’m glad that there was no yellow boxes behind the text because it would make the background images more difficult to see. Ethan is also working on a comic of his own and I can’t wait to see that too. Fan art contributions are always awesome and really show how strong the fan base is; anybody can write about how awesome Star Control is and how we deserve a new one and a picture will always grab more attention.

Thanks Tiberian and Glory Device for working on the Groombridge Log.  We’re excited to see more of your great work.  Take your time! :D