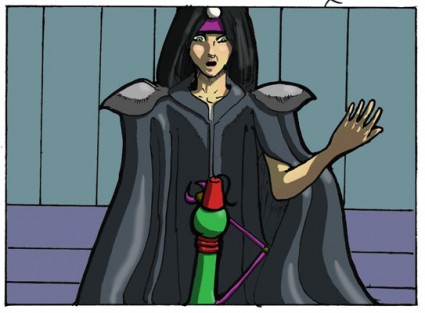 On September 4, Eth (Ethan Fleischer) posted his final preview frame and told everyone on SCDB that his comic would launch in a week.  Tomorrow, it will be one week, so hopefully we should see some more updates sometime soon.

Although I have no idea what the plot will be for this comic, I’ll post some observations that readers may find interesting:

I love seeing Star Control art and I can’t wait to see the comic in its complete form.  In addition to drawing, Eth also has experience in animation.  He has a Star Control website titled “Famous Battles of the Ur-Quan Conflict”.  It contains screenshots from other ports of the first Star Control with a plot written by Eth from the perspective of an Earth historian named Eth Erasmus Blackthorne.

I can’t wait to see more.  Thanks Eth for taking the time to share your comic with the world.